Because it’s about that time of year again: I have trays of soil that I have seeded with various kinds of vegetable, summer promises–one of which is pumpkins. There are other things I grow, of course, like the basil and tomatoes I love for the aroma they broadcast into the air around the garden. But I love pumpkins for their magical, transformational energy. I never see a pumpkin on the ground, one of my big ones, without thinking about enchanting it into a coach. I swear, one of these days I’ll do it. To have my giant pumpkin vines dashing out of the garden plot onto the lawn, and down toward the street, is to be invited to a foot race. I want to sprint alongside of them. 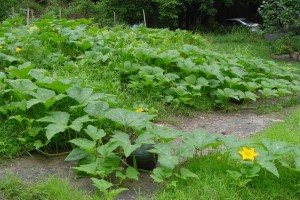 Maria Hummel, in her book House and Fire, has a poem that captures something of the hyperbole of pumpkins–something of that need, once you have really looked at pumpkins, to invent legends about them.

In the creation myths of pumpkin,
bellies grew first, billowing out
before the light, the sea and flowers.

And the bellies commanded the void:
let there be hollows in this darkness
and arches hung with pulp as soft

as the inside of a cheek; let there
be a cathedral for seeds, a favorite
purse in the garden’s green closet.

So the pumpkins grew into portly
multitudes that try not to trumpet
their superiority, each laden

with irreplaceable burdens,
each shape original and derivative,
the plump bulge of matrons,

taut barrels of elderly generals–
and what of that color? Is there
a wish in this world that can blush

as beautifully as the pumpkin?
Gold for secrecy, red for richness
and blessing, a yam paint

mixed with the flush on a girl’s
face the first night she realizes
how to possess her body, then

and vacations postponed
in favor of staying on the mound,
savoring some peace and quiet

for once, this fragile forever.
In the lame stories of pumpkin
heroes, the bravest line up at dawn

to be carved and shattered for the glory
of harvest, but the waning garden
refuses to cheer for them, or perhaps–

like the sea and its waves, or a mother
watching her sons ride away–it merely
calls too softly for them to hear:

Come back, let me open
for you again, you are mine,
you would never break inside me. 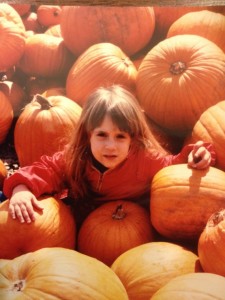 I couldn’t resist this, it’s one of my favorite pictures: a small, mystical life amid the pile of other lives with their orange glow. The little girl pictured here is now 28 years old, and has grown exquisitely into herself. But the photo reminds me of other of Maria Hummel’s poems. She will break your heart, and then heal it again, with her poems about her very ill infant son. For example:

As our life at home grows far
and faint, food becomes a ghost.
Today your arm ate strawberries.

I read you books on dinosaurs,
their lost hungers, fallen bones.
The tubes go in, their liquid clear.

I once loved words, their
fat red flesh, their roar and moan.
Today your arm eats strawberries

and what it tastes can never
be named or held or known.
The tubes go in, thin and clear,

sewing your skin to poles and air.
I once loved a meadow,
its clear little stream, lying there
on my arms, eating strawberries.

Her poem is a villanelle, which she brings off without visible effort. I have to keep going back to re-read it to see how she does it. The formal repetitions and cascading refrains remind me of the kinds of repetitions you find in early children’s books, such as Dr. Seuss, or maybe Sendak’s Chicken Soup With Rice–though here that reminiscence brings little joy, but instead conveys a wistful longing for an innocence neither she nor her son are allowed. Here the form, with its fragile order, must contain all sorrows, and bind the chaos of all fears. It’s a lot to ask. It’s a lot to live through.

The poet and artist, Gary Young, was one of the panelists in our recent AWP presentation in Seattle. He has created a PowerPoint presentation illustrating aspects of his translation from the Kanji of Kobun Chino Otogawa–who is perhaps best known in the U.S. as the spiritual guru of the late Steve Jobs. The esteem lavished in Japan upon Otogawa is founded, as you might imagine, less on commercial or media-driven hype, than upon his character as a monk and teacher.

White Pine Press is publishing Gary’s book of translations, along with Otogawa’s kanji.

At the recent AWP Conference in Seattle, which convened at the end of February, I moderated a panel on translation as an emblem of poetic freedoms. What follows is the text of my introduction.

I. Our presentation today focuses on two essential concepts:

1. That the act itself of translation chooses among various aspects of sequential cognitive resources—some linguistic, many that are not (What these resources are I will defer for the moment). The crucial feature within translation is its insistence upon a pluralism of linguistic aims.

2.  That the act of translation re-imagines and redefines the mechanisms by which language works: what language is, what are its aspects and features, what are its resources.

II. The first activity will be engaged by my three colleagues–Gary Young, Stephen Haven and James Brasfield– as they each in turn discuss specific features of their work in translating into contemporary American English the poetic works existing in three distinctly non-Western-European languages: Japanese, Chinese, and Ukrainian.

III. My task here is to engage in that second activity: I want to introduce a basis for re-conceiving a poetics that can reflect the range of creative possibilities available to the imagination—because current versions of postmodern poetics constitute a remarkably inappropriate reductivism.

As I’m sure we all know, the core of this poetics inhabits the troubled relationship between the sign and the signified. Its intellectual pedigree runs in generations from Saussure and Nietzsche, to Heidegger, to Derrida and Foucault, and subsequently into the current metamodernists and antihumanists.

The architecture of the argument is benignly simple:

a. Words have no essential relation to their referent.

b. Rather, meaning is merely a social consensus.

c. Therefore meaning represents the play of power and money by which social consensus is reached.

d. Ergo, language is the exercise of power, wielded by the wordsmith, to repress other similar exercises.

This entire house of logical cards derives upon that initial proposition: that language is a collection of nouns looking for their referents.

From the point of view of neuroscience, this proposition is untenable for many reasons, but we can start with its entire lack of empirical foundation. What is described by post-modern theorists does not represent the phenomenon they purport to explain. Saussure is the linguistic basis to which the philosophers point for justification, but Saussure was not fluent in, nor ever had even heard a native speaker using, the Indo-European languages from which he derived his theories of linguistics—from which in turn he then generalized to all languages. Accordingly, his conclusions amount to a sophisticated provincialism that, in my belief, has been persuasive largely because it has bolstered the provincialism of Continental and North American theorists.

Postmodern linguistic theory does not survive the translation to non-European languages. For instance, as Steve Haven will be explaining, any given sign in Chinese changes meaning according to which one of the four formal tones of voice in which it is spoken. Chinese does not limit itself to signs and signifieds, but introduces tonal aspects into its linguistic usage—which have remained unconsidered in postmodern theoretical formulations.

I want to propose a different intellectual practice–which will conserve the expectation that a poetics will be based upon features of our language, but that will define those features according to empirical observation and structured inquiry into the phenomena in question. I am, in other words, going to dip into neuroscience to provide an alternative study of the nature of language. *Accordingly, I will start with three observations about language, from the point of view of empirical science:

b. it is also patterned:–its features have regular, definable arrangements, which we can group into rules;

c. it is temporal  (It took me 28 seconds to say the words in that sentence.)

These sequential features are not limited to language, but in fact represent a primary inductive category according to which the brain makes cognitive sense of the environment at large. The world is chock full of sequential patterns—the regular and coherent occurrences of sounds, objects, and events to which the brain is sensitive. Some of these are linguistic, but many are not.

a. For instance, laughter is one of the set of complex, nonlinguistic vocalizations that nonetheless communicates a wide range of messages with different meanings.

b. We likewise find music meaningful,—which also is a structured sequential event–though it, too, is non-linguistic.

c. Many of us also find meaning in the sensuous sequences of dance–or (to pursue the world of motor movements further) even learning to swing a tennis racket. Dances, procedures for hitting a tennis ball, a golf ball, etc, are each a meaningful set of steps with which motor patterns are engaged. Along these lines we should likewise acknowledge that we walk and run, which are themselves brain-mediated sequential practices…which are non-linguistic.

d. Finally, we also keep track of time itself, which by definition is sequential—on a daily basis, as well as over prolonged years of developmental, biological time (i.e. circadian, developmental) and worldly time.

What science finds is that there is an interplay among these various neurological sequences. Language is not separate from the rest of cognition, but uses the same underlying neurological mechanisms as other non-linguistic sequential tasks. For instance, aphasic patients are commonly apraxic as well—meaning they are impaired in the production of novel sequential hand and arm movements. Further, the converse is also true: among aphasic patients, the work done to improve non-linguistic motor skills can contribute to improvements in syntax.

So let me conclude here. The translator, having assumed there can be no perfect copy of the original meaning,  is thereby compelled to re-conceive & revalue linguistic resources other than simply matching referents–what the words purportedly mean. The translator is free to look to the interplay among whatever expressive sequences seem called for–whether linguistic (such as hunting for appropriate words), or nonlinguistic, such as establishing a prosody, or working out an appropriate pace of the voice, or introducing tonal features such as sarcasm, or sometimes even environmental noises (The French, for instance,  translate the sound of a barking dog as Woooah Woooah). There is an immensity of sequential sounds, symbols, facial expressions., and physical gestures to sample. The task of the translator thereby opens the inquiry to a range of poetic expression that escapes repressive theory, and finds its limits—insofar as there are any—within the play of imagination itself.

Links to further thoughts and entertainments: