I should call attention to the project that the potter Ehren Tool has been engaged in for some time now. He has a compelling, wonderful installation at the Renwick Museum in Washington D.C., entitled  198 of Thousands, which is a collection of his ‘War Cups’ (This is my phrase, and not what he has chosen to call them). Each is made of stoneware, various glazes and decals. He is himself a veteran of the Gulf War, and his cups initially reflected his personal experience, but have grown to encompass the struggles of other soldiers, and their families. Here are links to his website, and to a recent interview with him:

The cup in these photographs reflects the traumas of Cortes’ invasion of Mexico, and the conquest of the Aztec civilization—as imagined in the last two chapters of my book Genealogies, some lines of which appear below.

Crow-headed women picked through
the battlefields in a final rally within
the heat beneath the blue mountain clouds,
the mesas emptied. Sarah didn’t wait
for the awful flocks before she gathered
Elam from reconnaissance, and
together took positions like a mist
might insinuate onto a morning
beach—by which I mean, and by occult
degrees, they faded from perception as
they neared the city common. If they were phantoms,
they’d like to be assassin phantoms as
they hefted their munitions invisibly
into abandoned rooms upstairs in view
of the proceedings in the courtyard on
the well-made work of masons, where Cortes
negotiated with ambassadors from mercenary
nations, traded promises of plunder
with his higher math, using zeros,
and with no one looking stashed the novel
treaties in the toilet of his disrespect.

Thank you, I’ll take that. Elam reached
to Sarah for the firing pin, and springs,
and reassembled the dark machine of destiny,
is how Sarah thought of it: the rifle
oiled in Elam’s hands, and ready. Get
used to it. He levered in a cartridge
for the modest shot from there, and read
the white winds. The sacred sky was blazing
with a clarifying light, allowing
him to see an end, at last, of action as
he fired. The hammer detonated the
percussion cap exactly at the moment
when the mountains shook like green robes,
closing distant roads with rocks, scattering
scarlet flocks of parrots screeching up
through rising plumes of dust. Adobe buildings
swayed, or crumbled. The tremblor shocked the audience,
rocked Cortes off the dais. Several
celebrants heard a leaden insect
missing them. In the melee, Elam
levered in another round—no
man of mercy in this mood—braced
against a rolling seismic wave, and once
he sighted grimly on Cortes. He shot
for the umbilicus exposed below
the armored chest plate. That would stop
his exclamation, and by the way, disband
the rash, inconsiderate, fiery
voluntaries left from the invading
expedition.

Except, to begin with,
nothing happened as expected. It looked
as if the god of plagues had come
again because, before the slug could strike,
the body lice and European biome
bloomed on Cortes into a mythical
immune response protecting him from any
outside missile. The bullet simple shorted
out, with loud and visible effects.
Clouds of living powder flew in colorful
eruptions, lightning clapped about him with
its smoke and bounce, igniting little fires,
spores and alien bacteria
basically ate everything around him,
and left a circle of ancient visitation.
Whereas the implications wouldn’t register
with Elam, prodigious in testosterone,
rigid, lame in reason, slanderous
to the time, Sarah with the graceful
ankles took the hint. Get the fuck out,
she shouted in the thunder of the third
attempt as Elam made it with his non-
stop, devouring, lethal bullet clanging
off the armor-plated heart of Cortes,
glancing at an angle toward a metal
bell appearing out of nowhere from
another era in a lovely tower
full of swallows, where it never rains,
to ricochet again, and catch Sarah
fully in the chest. It took her breath
away, her lung collapsed, she staggered over
Elam on the floor, and fell.
Meanwhile,
two moons were seen outside in different
phases—full, and waning gibbous—horrid
winds ruled the superflux, but calmed
as Elam set the rifle down.
He reeled
in panic as he checked the hemorrhage
in Sarah’s chest, stuffing spider webs
into the wounds. That worked, and helped
to re-inflate her lung, which eased her breathing.
She was burning like a fallen star,
Lord Death was singing to her, and
offended decency by making private
offers that wouldn’t keep. You are my food,
He said, I love your bones, and other like
promises, while Elam bathed her, and
examined her for bites. He changed her bandages,
steeped a willow tea against fever
in the tasteless days, and soon when she
was less confused, was spooning in a rabbit
broth he stewed from rabbits left for them
in secret by the worshipful, who made
such sacrifices to defeated gods
and local deities like them—who could
be seen by now, a little. She’d lost a tooth,
and whistled as she breathed, sleeping.

He watched
her re-compose, washed her with his tender
joy and vigilance, with no illusions,
and when she fell in moods, imperious,
subtle, full of unpleasing blots, he got
her up and walking, so when the kingdom finally
was taken in the name of Spain, she hobbled
on beside him, sometimes rode on their
improbable alpaca down the mountain
passes in a puny counter-clockwise
last push against the cosmic turning.
The jungles were abandoned, half-burned.
Press on their hearts, and they would say
they never did believe in travel. They
came down into the empty earthen world
at sea level, one of many, where they
had prospered once. Elam was afraid
to use the rifle, so they waded through
the blue-maned surf, and cast their lines,
or foraged in the tidal pools for crab
and abalone everywhere.
Whole
villages were gone. When the whale
ascended monstrous in the southern stars,
which marked their place, they started hunting for
their gig, sunk and hidden months ago,
but instead they stumbled on a lovely
cutter that Cortes had stashed for his
escape, just in case. What a weasel.
Still, they chased the boomslang and monkeys from
the hold—the latter soused on Spanish wine—,
plucked orchids, unhooked a mossy tree
sloth that dangled from the rigging near
the nesting quetzals, which they also cleared
away, wary always of goliath
spiders lying in wait. Look at you all,
Sarah thought, totally grateful. We must
be learning. With her charmed sigh, she stood
with Elam while the spring tide lurched
against the hull and keel, lifting them
from spills of silt until they floated under
light sail to slide through estuaries
into open water once again,
which Elam sometimes thought of—especially
after nights of excess in a foreign
port—as rapture. Looking back, he saw
a mauled corpse caught in the tidal swell,
rolling in the crash and drag of breakers,
until the sharks hit. Fog was ghosting
in. They needed room and blue water,
hence he hauled his wind, and bore north
by east into the pea soup obscuring
each particular beauty, all the big-
bellied sails—you wouldn’t think so—, moons
and other points of bearing on the unfixed
liquid elements transporting them 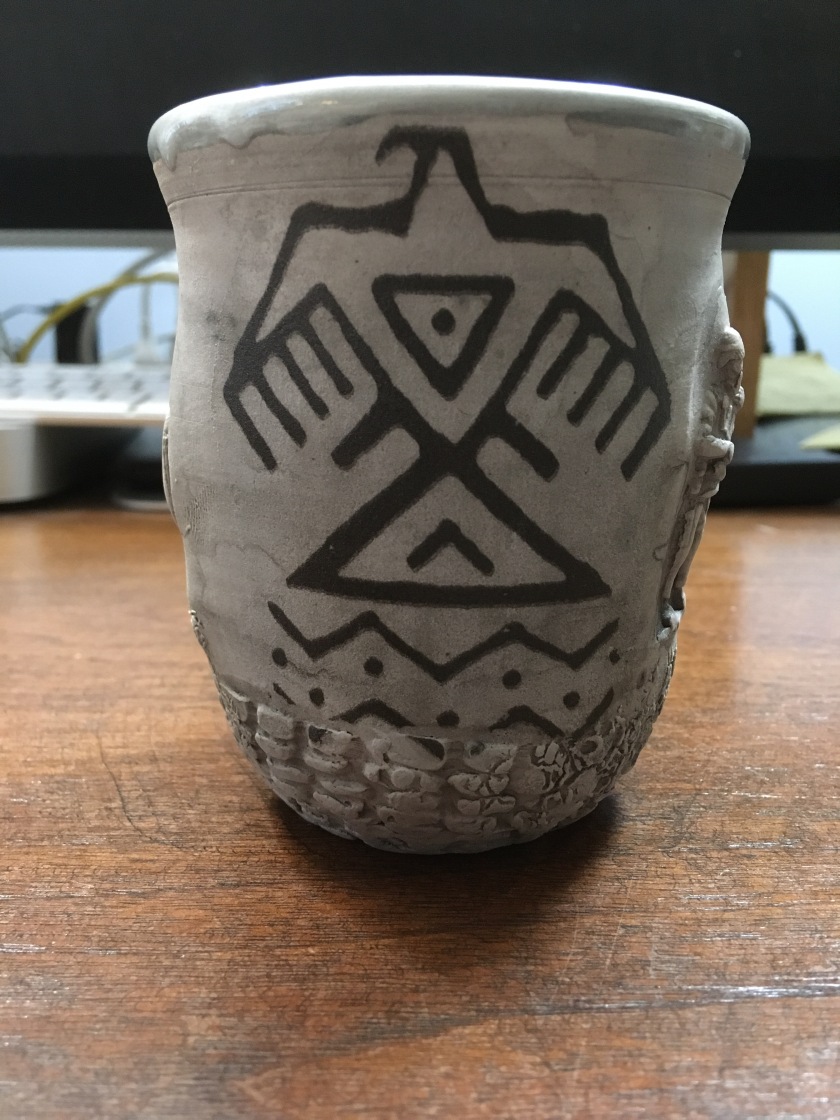