Massachusetts Reviews: The Book of Delights 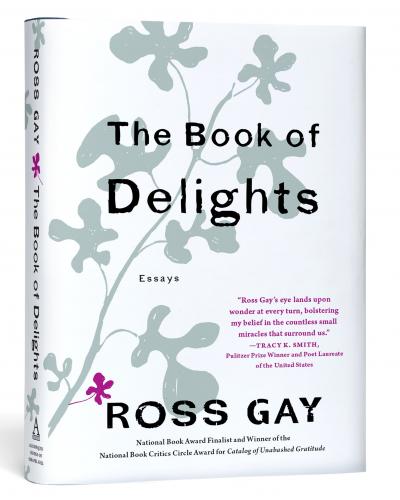 The Book of Delights: Essays by Ross Gay (Algonquin Books, 2019)

The 2019 Conference of the Association of Writers and Writing Programs concluded this spring, after nearly six hundred panels, readings and celebrations, and over eight hundred vendors and literary presses on display at the book fair—all crammed into three days and three nights. The Massachusetts Review was there, celebrating its 60th anniversary by organizing an excellent, memorable panel, and establishing its presence at the book fair. This conference for writers is, of course, not the only one held this year, but it is the largest, and its organizers were visibly committed to representing as wide a range of topics as writers can imagine—which, insofar as writers are very creative people as a whole, became in practice an admirably diverse program.

Indeed, many agendas were imagined differently than they are currently to be found in our national political climate. The AWP allowed space for writers to set topics for national debate, identify voices that are seldom heard or given credence, promote different points of view, cross gender boundaries, and in general call for resistance to the current political business of factionalism, paranoia, and narrow self-interest.

The virulence of anger and self-promotion at the highest levels of institutional power understandably prompts a rejoining ferocity in the opposing voices. What might be found missing among such voices, however, is an attempt to reach across dividing lines to find some basis for productive collaboration, or to discover a process of healing wounds after exercising cultural wars. Bravery is required to step visibly into the ground separating opposing militants, which is perhaps the first descriptor I want to use as I introduce Ross Gay’s The Book of Delights.

He does not make this claim for himself, bravery, but I think Gay would recognize that it might apply to a writer—perhaps especially a black writer—who, as he does, composes an entire book devoted to daily observations that include the delight he takes in seeing a red flower—an amaranth—growing by chance out of a crack in the street, or a woman stepping in and out of her shoe, “her foot curling up and stretching out and curling up.” He’s very good at finding small, everyday details that prompt intimate satisfactions, but we readers also know that elsewhere white lunatics armed with assault rifles are rushing into black churches to massacre the congregants. One of the risks Gay takes is to be trivialized, accused of ignoring the scale of atrocity as he attends to a flower.

Gay, of course, knows this, and very quickly in response he opens up the definition of delight. Readers might well think, we already know this feeling, but Gay demonstrates that we are incomplete in what we think delight constitutes, and that it is we who are trivialized by our lack of human empathy. This is a severe judgment, but he makes it kindly.

In Gay’s treatment, delight, and its close cousin gratitude, are fundamental experiential capacities: such feelings find and instill value in even unpromising features of an urban environment (flowers by a chain link fence with barbed wire on the top, “just in case”), and they respect the interpersonal gestures connecting people to each other. Most of these gestures are tiny, such as watching that woman with the tired feet surreptitiously take her shoe off. Or the pleasure he experiences when a stewardess on an airplane calls him honey.  Or the crazy humor when, during a security check at an airport, the TSA guy asks him where he’s going, and Gay tells him he’s being flown to Syracuse to read poems—and then a few seconds later he overhears the guy “saying to one of his colleagues as I jogged toward my gate, ‘Hey Mike, that guy’s being flown to Syracuse to read palms!’”

Gay will sometimes disguise the nature of his delight by offering it within an apology. For instance, he states “My parents were, mostly, mostly broke people who had neither the time nor the resources to always fix things the boring way, which is called replacement. And so the hatchback, cracked up by a trash truck. . . got fixed with a bungee cord.” His family also used duct tape to secure the hood when the latch broke, and kept a hammer “under the seat to tap the stuck starter until it went completely kaput.” I’ve had to use that trick myself on my forty-year-old diesel wagon, with kayaks strapped to the roof, way the fuck up the Gaspe Peninsula, where a person better know how things work because, let me tell you, you’re on your own. You won’t be calling Amazon for a new starter.

So this last delight is definitely one of my favorites. You just don’t find many people in literary or academic professions who know how to coax life out of an old, failing starter with the judicious use of a hammer. And of course what Gay publishes here is the practical knowledge that poor folks possess, unlike the overeducated crowd who can’t put air in their own tires. He is celebrating the basic competence and ingenuity necessary to keep your life running on track when you don’t have enough money to pay someone else to fix your problems for you. Thoreau and Emerson both would applaud him and his family for a self-reliance that professional economies condemn nowadays—because, by definition, impoverished people don’t spend a lot of money. He is reversing the common valuation.

And because he is a poet, Gay can also value the nuances possible in certain turns of phrase, such as “I need X like I need a hole in the head”—which, as he indicates “means I do not need X. I need to be fired like I need a hole in my head. I need this cancer to resurface like I need a hole in my head.” The occasion for mentioning this particular expression is the documentary on Vertus Hardiman, a black man who, as a five-year-old child, was made a subject by white scientists in a human radiation experiment, in which he was exposed to high levels of radiation that, in his instance, burned “a fist-sized hole in his skull, flesh and fat glistening.” Gay concludes this particular entry by noting “I’m trying to remember the last day I haven’t been reminded of the inconceivable violence black people have endured in this country. When talking to my friend Kia about struggling with paranoia, she said ‘You’d have to be crazy not to be paranoid as a black person in this country.’”

And yet he isn’t—neither paranoid nor crazy. He is writing a large book on delight, which includes, though is not limited to, the delight to be had in social resistance—such as his insistence on calling out white scientists who experiment on black children. Such as the delight his brother enjoys in owning a house in Pennsylvania, which “had a clause in the title that prohibited it from being sold to a colored person, which he is (indulge the anachronism; it was in the title).”  This is the same brave delight he takes in appreciating their parents, noting that “As my mother gets older, and in moments of openness, she has begun sharing more of her early life with my father—the family stuff, the this-apartment-is-no-longer-available stuff, the you-have-doomed-your-children-they will-be-fucked-in-the-head stuff. . . She told me my dad, to whom she was married for about thirty-five years until he died, said to her early on, ‘I might be making too much trouble in your life. Maybe we shouldn’t do this.’ But, you know, they did.”

In this one anecdote, as in many other of his daily entries scattered throughout his generous book, he wants explicitly to acknowledge the tensions inherent in what he means to convey by his term, delight, which in his mind is kin to what Zadie Smith concludes regarding the nature of joy. Gay notes that she “writes about being on her way to visit Auschwitz while her husband was holding her feet.“ “We were heading toward that which makes life intolerable” Smith writes,  “feeling the only thing that makes it worthwhile. That was joy.’”  She continues in this line of reasoning to conclude that “the intolerable makes life worthwhile”—which is a position Gay himself comes to agree with, though he infuses the idea with his particular belief in community: “What if we joined our sorrow,” he writes. “I’m saying, What if that is joy?”

This is a humane vision, a vision of social affinity, for which he assembles a chorus of supporting voices that include not only Zadie Smith, but the Japanese novelist Kenzaburo Oe, the poets Phil Levine and Rainer Rilke, the filmmaker Paolo Sorrentino, and Bethany, who was one of his students. Gay has a democratic and generous spirit. He wants to promote, in his own words, “the simple act of faith in the common decency, which is often rewarded but is called faith because not always.” He can, in fact, find instances of failure in common decency within his own behaviors. He is not a naive man, but a person who hopes to overlook or overcome momentary failures in people while expecting better of them. “I believe adamantly in the common decency, which grows, it turns out, with belief.”

Before turning you loose to read his book, I’d like to call attention to one more delight. Gay points out that at times his belief in common decency struggles against the cultural intent—by which he means chiefly white culture—to commodify suffering, especially the suffering of black families, by turning it into television entertainment. The particular source of his observation starts with a podcast about Whitney Houston’s early career, “which some channel,” he explains, “decided ought to be a reality television show, and which, from the sounds of it, a lot of people thought made good TV.”

And he goes on to imagine how that show might have gotten started, the pitch needed to convince producers to fund such a program: “I imagine you have to have meetings and secure producers or directors, get a budget, things like that. Many decisions and agreements have to occur, probably many handshakes, some drinks, plenty of golf, trying to figure out how best to exploit, to make a mockery of, a black family, the adults in which have made some of the best pop music of the last thirty years.” “I have no illusions,” he adds, “by which I mean to tell you it is a fact, that one of the objectives of popular culture, popular media, is to make blackness appear to be inextricable from suffering, and suffering from blackness.”

The proof that this equation is false is the book itself: “You have been reading a book of delights written by a black person,” he points out, “A book of black delight. Daily as air.” In The Book of Delights, Gay has published a vision that he is trying to make available to everyone—all races and ethnicities—though he is not insensitive to the odds. Delights may be daily, but they do not come cheap; they need earnest effort and sustained belief. They also require a soul like Ross Gay, who is sensitive to possibilities, ready to be pleased with people for better or worse, and who is willing simply to share what he has seen over the course of his forty-fourth year of life, from one birthday to the next.